She thought she was a painting.
A fine French masterpiece.
he beheld her in holy reverence,
knew every shadow, edge, and curve.
Contrived meaning, albeit superficial.
She used to glow in his spotlight,
held together by his frame.
Underneath the awestruck wonder,
a tinge of emptiness remained.
Mere canvas stretched over wood,
with watercolors running together, bleeding dry.

Before that: a book.
A spellbinding novel,
a page-turning thriller.
An epic, tragic, mystery.
he learned her language,
found meaning in her poetry,
found comfort in her prose.
Cover to cover, until the pages ran out.
No promise of happily ever after, simply:
The End.
These days she's at a loss for words.

He tells her she is clay.
Ever changing, malleable
She's softening in his hands
She's learning to trust him,
sometimes s t r e t c h e d thin || she cracks
He puts her back together, lovingly, carefully.
He knows her, He's been knitting her together since the beginning.

She is His, and she's finally realizing that's all that matters. 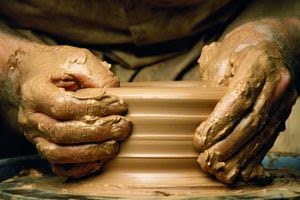